Outrage grows as bullets fly in city and children are hit 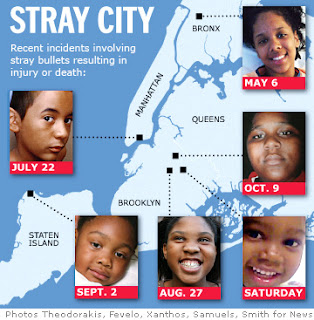 But precisely where is the outrage directed? The bad guys? The police who can't catch them? Read on...

"Holding hands in prayer, a Brooklyn family demanded an end to stray-bullet shootings yesterday as outrage grew over a citywide spike in random violence.

"You're not safe anywhere anymore," said Navet Valentine, grandmother of slain teen Tavin Alves. "If you can be shot in your own bedroom, where can you be safe?"

Tavin, 16, was looking out the window of his Bushwick bedroom last week when he was struck and killed by a stray bullet, allegedly fired by a trigger-happy career criminal with 17 prior arrests.

The two families' anger and anguish came as New York grapples with gun violence, and Mayor Bloomberg demands federal action to get guns off the streets. At least six children have been hit by stray bullets in the past six months in the city.

The NYPD does not release statistics on the number of bystanders caught in the crossfire, but community leaders say the violence must end now.

"This guy had 17 arrests," said state Sen. Eric Adams (D-Brooklyn). "How many more did he need before we get him off the street?"

Several patterns are readily discernible, even to the layman:

The ethnicity of those shooting and being shot.

The criminal records of the shooters.

The call to blame it all on guns and bring in the Feds.

Repeat offenders continue to create mayhem in virtually every one of our larger city's, so these braniacs decide that the best way to stop it all is to penalize the non-offenders. Because, as we've said time after time again, its easier to catch a non-criminal than a real criminal, and thats because the police have their hands tied by the lazy scum politicians who remain indebted to both shooters and shootees for their very livelihoods.

Tough liberal Guiliani cleaned up the streets then limpwrist liberal Bloomberg gave it back to the thugs. Because liberals can never, ever, be wrong, and this billionaire version simply MUST know better than we, guess what? Its all our fault.