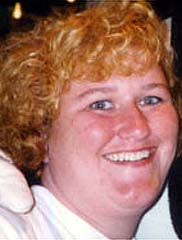 As a participant in the Memoriam for 9/11 victims, I drew Marianne. I've been showing her picture on and off for the past few days, and to be honest I dreaded today. What could possibly be said. How to offer my most sincere condolence for the barbaric manner in which she ended her sojourn here. From all accounts, Marianne was a wonderful woman. Thirty-four years young, she was a representative for United Airlines and was on vacation when Flight 175 slammed into the World Trade Center.

The above link is to the United Airlines memorial site for Marianne. It provides the basics, tells a little of who she was and where she lived, and fails as all words ultimately do when trying to make sense of something so very insane. In this link, her brother offers us the following:

George MacFarlane on February 7th, 2002 wrote... Marianne was my younger sister and one of the sweetest people I've ever met!! I miss her evry minute of every day. Marianne I LOVE YOU!! Georgie

I didn't know you, Marianne, but as a fellow traveler who happened upon you, it does my heart good to know that you had a loving family. And today we celebrate your rich and wonderful life more than your departure, for it is fitting to rejoice in the memory of one of the good ones.

Godspeed, god bless, we remember. Thank you for the grace you bestowed upon all you touched. If there is something beyond this mortal realm then you've gone home, Marianne. And if such is true then I hope we meet somewhere, sometime, so that I might say all of the this to you, in person.