Return of the Sting

I've tried to keep Frost Cutlery honest, but truth be told it'd be a full time occupation in order to keep old Jim compliant with even the minimums of human decency.

Yes, there have been some victories; they no longer steal copyrights and patents from "most" genuine knife companies. After notifying Kershaw that Frost had stolen their "Speedsafe" name for assisted opening knives, Kershaw came down hard on the old queen and that not only brought a halt to such mention on Cutlery Corner, but even on the website that proudly proclaimed "Speedsafe" to be proprietary to Frost.

No more stealing the Spyderco assisted opening hole and naming Frost look-a likes as "Spider-Eyes", gone are the days of borrowing the Boker "Bone Collector" name and design, and Case has even stopped the crooks from purloining their "Sod-Buster" names and configurations. Although ALL of the hosts skirt the issue by saying "we can't call them 'Sod-Busters' anymore", at least they've admitted the theft.

Not that most of the cretins who worship at the feet of queen Jim just so they can revel in keeping slavery alive and well in China take exception to such blatant robbery, but even small victories are better than ignominious defeats.

But ya can't win 'em all because the "trainloads of whitetail stag" have reared their thieving Frost heads again.

Germany, from whence the blade steel reportedly derives, does not have Whitetail Deer as an indigenous species. Neither does China, nor India. But the bragging has begun again. We shamed them early in in 2011 by describing the ridiculous assertion that somehow, someway, Frost found a railway line that could reach from Solingen, Germany to the knife factories of China just so's he could import Whitetail antler.

So for those who've not seen an Atlas nor learned to spot a swindler, here we go again.

Let's go over this one more time because it bears repeating. The stag handles cannot be Whitetail. The steel cannot be freighted via rail from or to Germany. The Chinese simply order whatever they need to fool the American public, stamp "made in Germany" and/or "Whitetail" then fill their orders so that simpletons can brag about what a terrific purchase they made; all the while hoping that these same simpletons don't notice the tiny "Made in China" that is all but hidden from casual view, and even if they do are by now so confused they simply believe the old queen and his commie partners.

(And no, railway lines do NOT reach from Tennessee to China either.)

As I've said time and again; who cares about the price and/or quality of what you buy. Just be aware that you've been lied to, swindled, and the old queen is laughing all the way to the bank because you are so fucking stupid.
Posted by Fits at 1/29/2012 04:22:00 AM 7 comments: 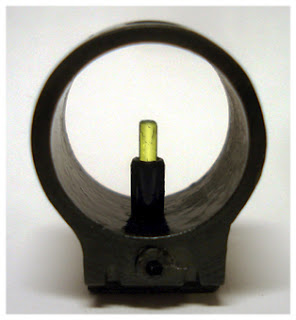 This is how one adjusts the Nagant for its abominable front sight picture designed to be a Nazi belt-buckle-popper at 300 yards.
The link is here, and I'll let ya know how it works soon.
Oh and by the way, one ragged hole at 50 yards is not only possible but quite doable. With decent enough ammo but of course.
Posted by Fits at 1/26/2012 12:03:00 AM 6 comments: