Women May Soon Be Drafted

Females may be included in the Selective Service and qualify for a potential draft should one be ordered by the president, Defense Secretary Leon Panetta said.
The U.S. military’s civilian leader lamented that he didn’t know who ran the Selective Service, but whoever does will “have to exercise some judgment based on what we just did,” Panetta said at a Pentagon press conference Thursday.
On Thursday, Panetta and Army Gen. Martin Dempsey, chairman of the Joint Chiefs of Staff, lifted the official ban on women serving in combat roles, removing gender barriers from jobs in the military.

There's a reason why women have their own sporting venues. Simply put, they cannot compete with men.

War isn't tennis or golf, and to dilute the combat efficiency of an all-male unit is nothing short of criminal.

Besides the fact that not one free nation in the world uses women in combat roles. A lot of this ludicrous hubbub began back when some Israeli gals from the steno pool hopped on a passing tank after the 3-day war, and a myth was born.

Draft them? Sure. Every unit could use some extra clerk-typists. But you all know what will really happen, now don't you. The standards will be lowered. As usual. Real life isn't some Hollywood war flick where oh so tough gals not only keep pace with but often exceed what their male counterparts are capable of.

Pardon my Fwench but bullshit. They are slower, weaker, and far more prone to become over emotional, and over emotional in combat means they'll get someone else killed and it isn't going to be the enemy. And forget the fact of what the moose-limbs do to the women they own. Be prepared for a video of Sally Soldier being tortured, raped, then beheaded.

An explosion deep within Iran’s Fordow nuclear facility has destroyed much of the installation and trapped about 240 personnel deep underground, according to a former intelligence officer of the Islamic regime.

According to a source in the security forces protecting Fordow, an explosion on Monday at 11:30 a.m. Tehran time rocked the site, which is buried deep under a mountain and immune not only to airstrikes but to most bunker-buster bombs. The report of the blast came via Hamidreza Zakeri, formerly with the Islamic regime’s Ministry of Intelligence and National Security.

The blast shook facilities within a radius of three miles. Security forces have enforced a no-traffic radius of 15 miles, and the Tehran-Qom highway was shut down for several hours after the blast, the source said. As of Wednesday afternoon, rescue workers had failed to reach the trapped personnel.

Not that I'd doubt for a moment that one or more of those insane moose limbs simply pushed the wrong button...whoops...but it sure seems that someone got past security with one helluva boom-boom maker.
Posted by Fits at 1/28/2013 01:12:00 AM 6 comments:

When Men Were Men And Not Ashamed Of It...

The sniveling wimps who'd turn us all into campfire girls have not the slightest understanding of history, reality, or the inescapable fact that we exist in a dangerous world and must remain prepared to defend both life and liberty at the drop of a hat.
Posted by Fits at 1/24/2013 10:13:00 AM No comments: 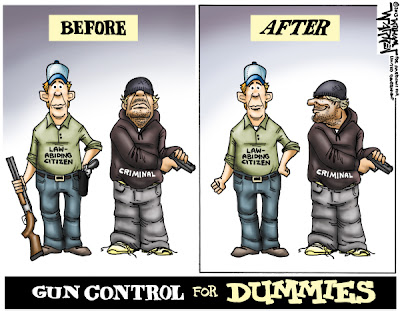 Even the most simple of dullards has to realize that law abiding folks don't do UN-law-abiding things with any degree of regularity, but then again liberals are a species far beneath the dullard line. But if the Obama administration has been good for one thing it's been to lower the bar and "WE TOLD YOU SO".

Stan Musial, the St. Louis Cardinals star with the corkscrew stance and too many batting records to fit on his Hall of Fame plaque, died Saturday. He was 92.

Most of Stan's glory days happened before my birth or memory, but our Dad's raved about him which was unusual for an out of town player.

If Pete Rose hadn't perfected the swinging bunt, Musial would still be in the top 3 of real players who could hit a ton and then some.  Musial's 3630 hits place him just behind Hank Aaron, two seasons behind Ty Cobb, and real men watched the game of baseball to see the bat being swung not pushed as if by a street cleaner's brush.
Posted by Fits at 1/19/2013 09:41:00 PM No comments:

Arms In Battle: The Gatling 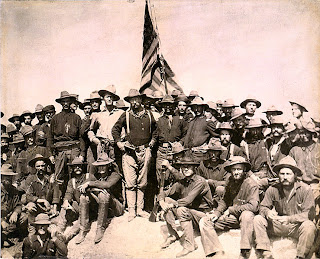 Witnessing the assault on San Juan Hill, Col. Roosevelt decided to cross the steep ravine from Kettle Hill to San Juan Hill to support the fighting still going on there. Calling for his men to follow him, he ran forward, only to find just five of the Rough Riders following him (most had not heard his command). Roosevelt returned and gathered together a larger group of his men, leading them down the western slope of Kettle Hill, past a small lagoon, and up the northern extension of San Juan Hill, but the fighting was over for the top of the heights. General Summer intercepted Roosevelt and ordered him back to Kettle Hill immediately to prepare for the expected counterattack. When he returned his men were exhausted and his horse was again spent from the heat. A counterattack directed at Kettle Hill by some 600 Spanish infantry was stopped primarily by the fire of a single ten-barreled .30 Gatling Gun manned by Sergeant Green of the Gatling Gun Detachment, which (according to Spanish officers captured after the attack) killed or wounded all but 40 of the Spanish attackers.[18]

You read that right. Five hundred and sixty men mowed down by a single Gatling Gun isn't anything I'd normally take as gospel, but there's enough eye witness evidence to prove it. We really didn't have the rifles to compete with the Spaniards, but the Gatling's struck fear into them and well it should have.
Posted by Fits at 1/15/2013 02:26:00 AM No comments:

Another interesting fact: According to the FBI, nearly twice as many people are killed by hands and fists each year than are killed by murderers who use rifles.
The bottom line: A rifle ban is as illogical as it is unconstitutional. We face far greater danger from individuals armed with carpenters' tools and a caveman's stick.
And it seems fairly obvious that if more people had a gun, less people would be inclined to try to hit them in the head with a hammer.

I knew it I knew it I FRICKING knew it. High time to arrest Chuck Norris and alla them home improvement douchebags who cause far more fatalities than my firearms.

Today we wanted to send out a short notice about the current situation in the gun industry.


Most of you have heard of the panic buying that has been occurring since proposed gun control legislation has been discussed daily on the news. We wanted to try to keep our customers informed of what we see going on from our end, both bad and good.

1. There are extensive shortages of several key items. Products that may be banned are often no longer in stock, such as mags over 10rds for AR-15, AK-47, popular pistols, and ammo in key calibers. The urge to stock up on these items continues to be very strong and we are unsure what supply will be like in the future. Manufacturers may not be able to keep up, some stating that future supplies will be limited for quite some time, especially on AR and AK rifles and magazines.

2. Prices are going up. This is a fact of life during shortages due to increased demand and short supply. If you browse gun auction websites you will see the value of items climbing daily. Luckily most of the prices at J&G Sales have not changed and remain stable, although some items have increased, or will soon. The increased prices are due to several factors, including:

A. Suppliers who have increased our costs when we order replacement stock.
B. Suppliers no longer importing or producing certain items at all, making what is currently available no longer replaceable and increasing its value.
C. Some price increases to allow items to be available to more people over a longer period, preventing a few resellers from buying everything.
Now the GOOD:

1. Many suppliers are ramping up production to try to get product to the dealers to restock as soon as possible. We are expecting AR-15 mags to continue coming in, as well as handgun mags, and ammo. Shipments will probably be smaller than previously, as manufacturers try to spread around the supply and not ship it all to only one or two dealers. Gun production is more difficult to increase, and many manufacturers were already running close to full capacity before the rush. We do expect more domestically produced guns, although AR style rifles will probably be available only in small batches. Unfortunately, we do not expect a steady supply of AK style rifles for some time.

2. Prices seem to be stabilizing a bit, although they will continue to be extremely volatile depending on the details of new legislation, and on continued word from manufacturers regarding future availability.

In summary, we hope these times will pass and enough government representatives will remember their oaths of office and keep our freedom intact. We at J&G plan to stick it out for the long haul and continue to supply our customers into the future. We pledge to you that we will not cave to outside societal pressure and will stay loyal to you and continue selling lawful items to law abiding citizens.

I still do all of my  purchases from J&G, as they are top notch and super reliable. Yes, I've added to my collection of Curio & Relics, but just don't believe it is the right time to be giving potential villains thieves and scoundrels the impetus to come a'knocking'.
Posted by Fits at 1/03/2013 11:02:00 PM No comments: 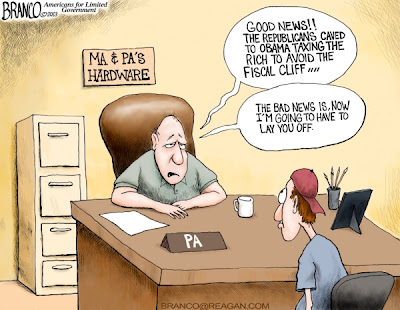 Johnny the hardware boy can now be replaced by Juan who'll settle for pennies on the dollar. Then of course send his paycheck to parts unknown instead of pumping the cash back into our economy.
Posted by Fits at 1/03/2013 02:29:00 PM 1 comment:

Not bad. Not bad at all, eh? More as more arrives.

BLOOD RUNNING IN THE STREETS!!! Ummmmm...

Officials in Florida expected that the total number of Sunshine State concealed carry permit holders would exceed one million by the end of 2012.
Doubling since 2007, the number of concealed weapons license holders will top 5 percent of Florida’s 19.1 million residents in a state that is number one nationally in licenses issued, the News Service of Florida reported.  Florida has been licensing concealed weapons since 1987, when state officials took over authority from counties that had a patchwork of requirements regarding who could carry and what was needed to qualify for a license.
Clearly it is a popular law and has been taken advantage of by a large number of Floridians who have acted responsibly, said Adam Putnam, commissioner of the Florida Department of Agriculture and Consumer Services, the agency which oversees the state¹s concealed carry program.
Floridians who are obtaining these licenses are obtaining them for the right reason and are using them in an appropriate way.

Does your state have at least 5% of it's male population ready to step in when necessary to stop the slaughter?

If not, then get a CCW and convince your friends to as well. I know that a lot of people don't like asking for a permission slip to exercise a Constitutional right, but we have to continue showing the anti's that we're more law abiding than the average bear.
Posted by Fits at 1/03/2013 08:29:00 AM No comments: