The REAL Cost Of Illegal Immigration 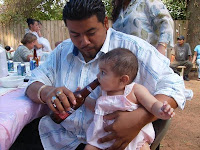 The High Cost of Cheap Labor: Illegal Immigration and the Federal Budget

So yeah; there was copious information even in those darkest of days...ha, weren't we the idiots to think George was a nincompoop...that illegal immigrants drained far more from society than they contributed, but that's fer chrissake only common sense. But I was as guilty as the next guy when it came to seeking full frontal Pollyanna status while wearing rose colored glasses and sipping high tea, pinky all askew..
They, the criminals, do far more than ruin the summer jobs for kids programs. And chiefly because they tend to lean leftish, the democrats among us hid the real truth as long as they could, with hope that enough criminals could be instantaneously converted to bonafide Americans and elect even more democrats.
It's what ALL cults masquerading as religions do. CONVERT. Islam for example dictates that unless an infidel can be made to worship dirty old Mo and his flying horsies, said infidel is to be summarily dispatched, forthwith, even. While in the minority, islamic followers act all nice and friendly and enjoy the high tea too. Let them grab a strong enough foothold, and it's off to the races.
Conversion isn't an option, it's the PRIME DIRECTIVE. It's why lefty democrats...be honest now, there really isn't any other kind so let's stop the bullswaddle...follow directions from on high to, regardless of the harm to America, lie, cheat, and steal in order to filter through as many criminals from Mexico and beyond as is humanly possible.
They vote democrat and help the cult to grow.
Why are democrats so dumb? Why are islamists so dumb? Why do people continue to harm other people? Why is the sky blue, Daddy?
Cuz it is. Because we am what we am and that's all that we am. No unicorns shitting ice cream, no quadruple rainbows with pots of gold awaiting, and hugging a tree is stupid because the frickin tree could care less. Everyone with half a brain knows the world to be a dangerous place to play outside in. The rest need us to protect them. Problem arises when we've protected them SO WELL that they actually believe in the Easter Bunny.

The Mexican economy is in shambles, will forever BE in shambles, so lots and lots of Mexicans sneak on up to where they can steal from far richer folk. John Dillinger said the reason he robbed banks was because that's where they keep the money. Not a one of us should care when people enter the country legally and set about becoming productive American citizens. But the days of wine and roses regarding Mexicans isn't EVER coming unless Mexico as a whole gets off its burrito eating ass and acts as it should. We simply cannot continue to offer blanket amnesty for one wave of villains thieves and scoundrels after another.