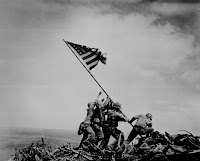 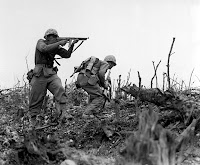 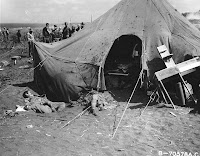 February 19, 1945 was the official beginning of Marine hostilities on the previously held Jap island of Iwo Jima.

To my Father and all his buddies who fought their way across that blasted hunk of worthless rock, Semper Fi.

The 26,000 American casualties in taking Iwo were greater than the TOTAL Allied dead and wounded from D-Day.

6500 Marines and over 300 Navy Corpsmen died in the fighting. Were that to happen today, the NY Times would be posting headlines of the "bogged-down" American effort and call for an immediate timetable for withdrawal. Something their father's should have done.

But this isn't about the commie bastards of this era, but a salute to the men who slugged it out toe-to-toe with the best Japan had to offer and killed more than 19,000 of the little fuckers.

And in the process marking the first time in over 5000 years that an invader had prevailed on Japanese soil.

This will be the bloodiest fight in Marine Corps history. We’ll catch seven kinds of hell

on the beaches, and that will just be the beginning. The fighting will be fierce and the casualties will be awful, but my Marines will take the damned island.