Glock Woos Marine and Army Spec Ops. Is DoD Next?

U.S. Marine special operations forces recently chose the Glock 19 as their official sidearm, but this isn't the first time elite units have invested in the Austrian pistol maker. The U.S. Army's 75th Ranger Regiment decided to pure-fleet its battalions with the Glock 19 in September 2015, according to an Army source familiar with the decision who is not authorized to speak to the media. Four months later, U.S. Army Special Operations Command followed the Ranger Regiment's example and chose Glock 19 for the rest of its forces, including all Special Forces Groups and the 160th Special Operations Aviation Regiment, the source said. 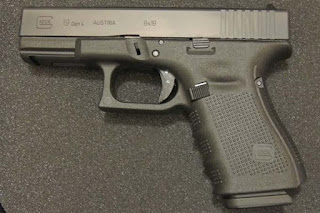 Pictured is a Glock made in Austria; hence an out of date one since all Glocks destined for government useage are assembled in Georgia.
Posted by Fits at 10/19/2016 09:16:00 PM