Kaddafi Sleeps With The Microwave Pizza's 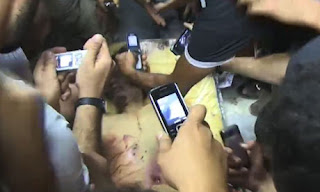 Well, well, well. Seems now that old Omar was captured alive, tortured, then riddled with bullets as he lay helpless and begging for his life. And his body is at a local grocery store in the frozen food department, so that folks can meander in and have a good spit at the old tyrant while they take cellphone pics for posterity.
And the libs bitched at Bush for allowing some fake waterboarding? While Obama ordered the drone strike that took down Kaddafi's convoy?
Gotta love the double standard by which these lefties live by. Not that the old frig didn't deserve to die like a dog, but where was his lawyer? Were his rights read to him? Was there a doctor on hand to monitor his "interrogation"?
Awaiting the hue and cry from the angry left over this. Just not holding my breath. But I'll tell you one thing; where this to have happened when Bush was in office, Harry Reid and Nancy would have been calling or his impeachment.
Posted by Fits at 10/22/2011 01:19:00 AM