This Day In History...Of The Twilight Zone

"...now this leg folder we're featuring in order to commemorate this day in history, October 23rd, 1915, when women in America received the right to vote.." Todd Boone, Cutlery Corner, 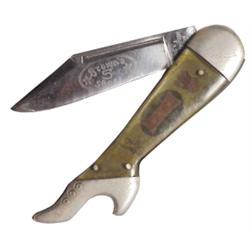 Aside from the sexist old boot-leg knives that supposedly went the way of the Dodo, the 19th Amendment was passed on August 26th, 1920.