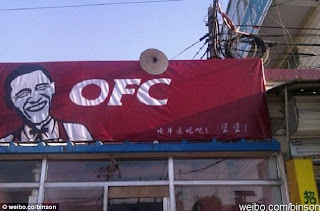 "...in Beijing, China, a restaurant is actually calling itself OFC with a logo that looks alarmingly like the President dressed in the colonel's clothes.
The catchphrase underneath, apparently says 'We’re so cool, aren’t we?'

Yeah, but can they teach him to say "Do you want fries with that?"