After Comedy Central cut a portion of a South Park episode following a death threat from a radical Muslim group, Seattle cartoonist Molly Norris wanted to counter the fear. She has declared May 20th "Everybody Draw Mohammed Day."

Norris told KIRO Radio's Dave Ross that cartoonists are meant to challenge the lines of political correctness. "That's a cartoonist's job, to be non-PC." 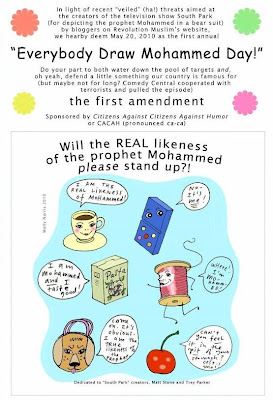 Shame of it all is that I can't draw a straight line with a ruler.