Former ACORN head Bertha Lewis told a group of the Young Democratic Socialists that they should "do everything [they] can" to build their organization, and then insisted that our times are worse than internment under the Japanese and the years of Jim Crow laws."
Gee. It is WORSE today. And here I didn't even know that the interned Japs were given even MORE welfare and paid MORE big bucks for every kid they bounced out and formed groups even MORE attuned to sedition and outright thievery than today's ACORN and its admirers. (Cough, Barry Hussein) 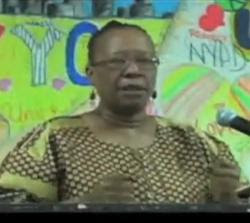 Tell ya what I DO know...
Once upon a time not all that much time ago, dressing like that and being alla that fat and ugly were attributes ONLY seen in traveling freak shows.
So Bertha should thank her lucky stars to be living in today's America, where stupidity and homeliness are no longer black marks against ones rising to the top. Well. Still crimes against nature, sure.
Posted by Fits at 4/22/2010 12:29:00 AM