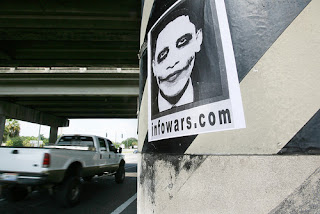 CLERMONT - Clermont police have interviewed one suspect who is admitting to putting up the dozens of posters pasted around the city depicting President Obama as the Joker character from the Batman film The Dark Knight, city officials confirmed.

Assistant City Manager Darren Gray said city officials have an individual "admitting to putting up 500" of the posters.

Clermont Police Capt. Eric Jensen said the male individual has admitted to putting up some signs, but investigators suspect others were involved and their investigation is continuing.

"We have talked to an individual," Jensen said. "He only admitted to some of it...We're still tracking down leads and talking to folks. We have not arrested anybody."

At this point officials are not sure how much damage was caused by the signs or the dollar amount associated with the clean-up.

City officials, meanwhile, are trying to determine what local crimes might be associated with the posting of the images on public and private properties. They've also been busy ripping down the sticky signs because they're a violation of city ordinance regarding illegal signs.

Jensen said he doesn't have a good count on the number of posters put up because, he said, "People are going out and tearing them down."

In a press release put out late today, Jensen said the suspect "also asked if he could video tape the encounter with the officers." Clermont Police declined that request.

"Currently we are still conducting interviews of victims, witnesses, and other suspects who were placing the Obama Joker Poster throughout our city," Jensen said in the statement. "We believe that the postings are the result of multiple suspects. We are hopeful that we can develop enough information to present charges of vandalism to the State Attorney's Office for review."

Amazing, isn't it. Under the guise of "cleaning up the posters", much of Kalifornification is in fact frothing at the mouth over the full frontal audacity of whomever had the unmitigated gall to portray their messiah in a less than flattering manner...

And it's fricking hilarious. Back when the seemingly weekly Bush cartoon offerings generated by libtards would surface, I'd laugh my ass off at the chimp-hitler-moron portrayals of W, and I happen to think that old George did so as well.

Argue with his policies but nothing can dismiss the fact that the man was a patriot, who, in war and peace, served his country to the best of his ability. Did he deserve such caricatures?

Deserve has nothing to do with it when it comes to politics. Grownups know this. But commie motherfuckers don't dare let the public see their master's feet of clay.