Hillary Finally Finds A Job Suited For Her Unique Talents 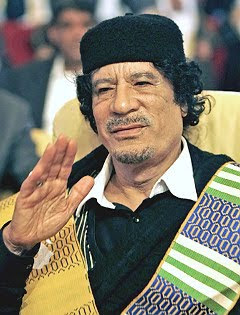 WASHINGTON - "Hillary Clinton likes to remind people, including her husband, that she's the secretary of state, but her role has now expanded to became the hotel booking agent for screwy Libyan dictator Moammar Khadafy.

The State Department was desperately trying to avoid an international incident by finding Khadafy a place in the city so he doesn't put down stakes, literally, by pitching a tent in Englewood, N.J.

"We are involved in discussions" on the Khadafy dilemma, said State Department spokesman Ian Kelly.

"We, of course, are sensitive to the concerns" of whoever might have to share the neighborhood with Khadafy, Kelly said, adding, "No decision has been made ... regarding where he will stay."

Since the Obie Administration HAS no policy regarding human rights, murderous thugs such as the criminal known as Mo Dafy have their very own secretary of state looking for cribs to tide them over.

EDIT: Sorry about that. The pic is Mo Dafy and not Skankles. I often confuse one with the other.