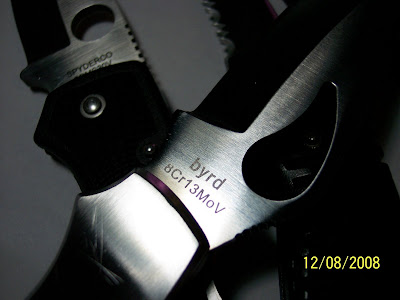 From left to right:

Four distinctly different folders. The Byrd is almost 6 ounces with a nearly 4" blade. The Spyderco is less than 3 ounces with "THE" steel of the month...S30V. The Frost and Winchester are basically junk stainless of dubious parenthood. 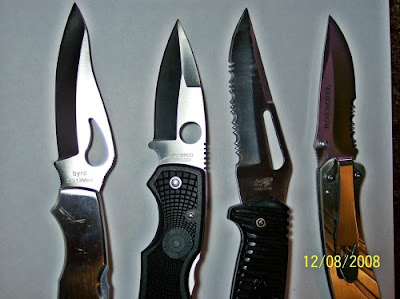 Basically, few folks care enough to spend more money, in some cases lots more money, for a high quality blade. In perusing some of the online knife forums, I saw time and again how men were perplexed as to why a Spyderco or pretty much any other of the upscale manufacturers would charge so much when "their" knife was just as sharp as sharp could be and what was up with all of this special steel anyway?

Now, I didn't say all, but one helluva lot of knife owners simply don't know good steel from bad, and ya know what?

Who cares. For most purposes, not a damned thing wrong with a knife like the Falcon or the Winchester branded product, but then don't be all that surprised when it goes kerplooey. S30V steel will take and keep an edge longer, and at 60-61 hardness still remains flexible enough to roll with the punches.

The Byrd Cara Cara is the closest thing to a self-defense knife in folder form as I've seen, for any amount of money. The Chinaman steel is closest to, say AUS 8 on vitamins, it keeps an edge well and is easy to resharpen.

Both the Falcon and Winchester are with me whenever I'm camping out or swamping, blades that are reasonably sharp and wouldn't break my heart to lose. Hey, Wally World had the Winchester for 5, yes, 5 bucks and it came from the package sharp enough to shave hair. Won't stay that way for long nor take anything close to its original edge, but at 5 bananas why worry. Same with the Falcon. Sharp enough for government work and losing a $6 knife isn't going to cause me all that much lost sleep.

But back to the Spyderco. The Native is simply one of the best pocket knives I've ever owned. Retail it goes for between $45 and $80, and yeah, that's an awful lot of between but even at list price is a bargain for the kind of steel you get. The handle is a special nylon but you can get the Native in G-10 if the spirit moves you, but that's going to raise the price another $20 or so.

The Cara Cara is ALL stainless steel, including handle, and so is the Winny. The Falcon grip area is pretty much the cheapest plastic you can imagine but you do get what ya pays for, and of all of the knives it has a permanent mounted clip that cannot be removed and switched around for left handed carry, etc.
Posted by Fits at 12/08/2008 06:14:00 PM