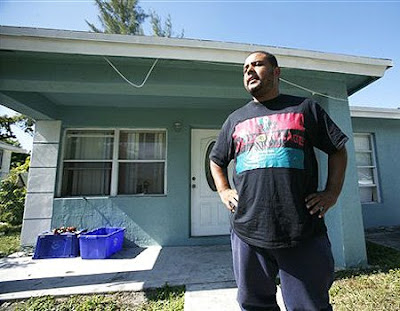 "Florida — especially the Miami area, with its once-booming condo market — is one of the hardest-hit states in the housing crisis, largely because of overbuilding and speculation. In September, Florida had the nation's second-highest foreclosure rate, with one out of every 178 homes in default, according to Realty Trac, an online marketer of foreclosed properties. Only Nevada's rate was higher.

Like other cities, Miami is trying to ease the problem. Officials launched a foreclosure-prevention program to help homeowners who have fallen behind on their mortgage, with loans of up to $7,500 per household.

The city also recently passed an ordinance requiring owners of abandoned homes — whether an individual or bank — to register those properties with the city so police can better monitor them."

Good one. "Monitor them".