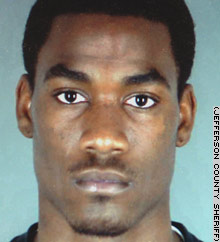 ...We need this kid and more like him to definitively assess penetration characteristics. That would require a Joshua-Meter of sorts, and much testing. Hey, someone's gotta do it...

PORT ARTHUR, Texas (AP) -- In the middle of Joshua Bush's forehead, two inches above his eyes, lies the evidence that prosecutors say could send the teenager to prison for attempted murder: a 9 mm bullet, lodged just under the skin.

Prosecutors say it will prove that Bush, 17, tried to kill the owner of a used-car lot after a robbery in July. And they have obtained a search warrant to extract the slug.

But Bush and his lawyer are fighting the removal, in a legal and medical oddity that raises questions about patient privacy and how far the government can go to solve crimes without running afoul of the constitutional protection against unreasonable searches and seizures.

"It's unfortunate this arguably important piece of evidence is in a place where it can't be easily retrieved," said Seth Chandler, a professor at the University of Houston Law Center. "You have to balance our desire to convict the guilty against the government not poking around our bodies on a supposition."

Investigators say that Bush was part of a group of gang members who broke into a used car lot and tried to steal vehicles. According to police, Bush tried to shoot businessman Alan Olive, and when Olive returned fire, a bullet struck the teenager and burrowed into the soft, fatty tissue of his forehead.

"The officers noticed the guy looks like hell. One of his eyes is black and he has a big old knot on his forehead," Rodriguez said. "He tells police he got hurt playing basketball."

A few days later, Bush went to the hospital and told doctors he had been hit by a stray bullet as he sat on a couch in an apartment.