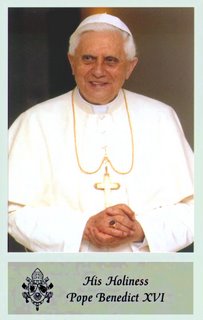 VATICAN CITY — "Pope Benedict XVI urged a solution to conflicts across the world, especially in the Middle East and Africa, in a Christmas Day address Monday that included an appeal for the poor, the exploited and all those who suffer.

"With deep apprehension I think, on this festive day, of the Middle East, marked by so many grave crises and conflicts, and I express my hope that the way will be opened to a just and lasting peace," Benedict said in his traditional "Urbi et Orbi" speech — Latin for "to the city and to the world."

The pope singled out the Israeli-Palestinian conflict in his speech.

"I place in the hands of the divine Child of Bethlehem the indications of a resumption of dialogue between the Israelis and the Palestinians, which we have witnessed in recent days, and the hope of further encouraging developments," the pontiff added, speaking from a balcony of St. Peter's Basilica."

It's a tossup as to where one hears more calls for worldwide peace. Popes or beauty contests. Anyhoot, shame he just doesn't call for another Crusade because that'd be the only surefire way to achieve anything resembling peace.
Posted by Fits at 12/25/2006 03:44:00 PM