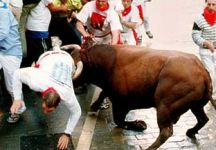 More than two million Muslims have taken part in a prayer ceremony on Mount Arafat - one of the main events in the annual pilgrimage to Mecca.

The pilgrims will also hear a sermon modelled on the one the Prophet Muhammad is believed to have given at the site about 1,400 years ago.

The ritual forms the spiritual climax of the Hajj.

New safety measures have been added to the Hajj, aimed at preventing stampedes that have killed hundreds previously.

In January, almost 400 people were killed and some 300 injured in a stampede during one of the rituals, and safety officials have turned to Pamplona, Spain for advice on how best to prevent injury when thousands of crazed animals are running berserk at the same time.

"Those bulls they weigh a ton," an official reported to the AP, "and that's a dozen or more pilgrims each, so if they can stop the carnage there we are certain we can do the same here as well..."