Everything You Wanted To Know About The Varmint Round Identified As The .223/5.56 But Were Afraid To Ask... 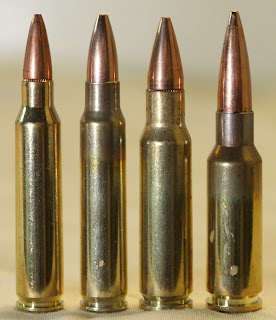 The original caliber for the AR-15 wasn’t the .223/5.56, it was a slightly smaller cartridge. The .222 Special delivered the kind of performance that the designers wanted, which was basically a 50-grain bullet at under 3,000 feet per second.
The Army, trying to keep the AR away and keep the M14 in the running, kept moving the goalposts. Finally, they insisted that the bullet used had to penetrate a steel helmet at a distance farther than their own research had indicated soldiers fired on opponents. The special got stretched and boosted, until the 55-grain FMJ was at 3,100 fps.
And there it stood, until the mid-1980s, when the SS109 came about. That was intended for use against swarms of Soviet infantry in Western Europe. What, there never were swarms of Soviet infantry in Western Europe? Musta worked.
So our armed forces had a decision to make after the 5.56 went kerplop. Drop billions redesigning and testing and manufacturing new battle rifles, ammunition and magazines, or spend the money on better field radios so as to call in air support and/or artillery.
Pictured: The basic lineup: .223, 6X45, 6.8 and 6.5. All of these are double-stack magazines, and thus have reasonably large capacities. The fattest, the 6.5, still fits 20 or so in a regular-sized magazine.
Please click the headline link for more.
Posted by Fits at 4/04/2011 01:32:00 PM