Primer To The Royal Wedding

Boring, bald, goofy looking Prince William will marry Kate Middleton. Willy will become King one day, and Katie...the first commoner to become an HRM in over 300 years...will be the Queen.

Willy might be marrying beneath his station but Katie is so far above his gene pool as to make him close to being another species entirely. The men will be stuffed into unearned uniforms decorated with unearned medals, most notably the Order of the Unmatched Boot, and the Sash of the Holy Toucan. The women perched beneath the most garish and stupid looking hats imaginable and dragging along the Holy Train of Gibraltar's First Folly.

After the wedding, Prince William will assume a new title, as "Prince" simply means he was born into the ROYAL FAMILY. All of Great Britain is agog over what new honorific he'll have with the smart money betting on Duke of Earl, or perhaps even Count du Monie. Kate could never have been referred to as "Princess" since she has no ROYAL bloodlines, and most probably will assume the secondary title of Vixen du Babe after of course her initial title of Duchess of Wuthering Heights.
There are 1900 people awaiting the arrival of the Queen-to-be, NONE of them named Barack or Michelle Obama. This is notable as there are soccer players arriving but the president of the United States was snubbed. Which goes to prove that no matter how you feel about royalty, they DO have taste. 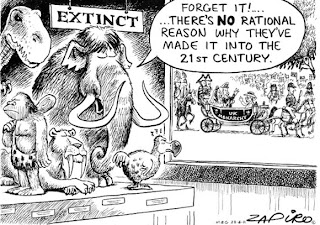 Only qualification to be a royal is you didn't end up being the wet spot on the sheet.

just this line alone makes me love your blog -

"This is notable as there are soccer players arriving but the president of the United States was snubbed. Which goes to prove that no matter how you feel about royalty, they DO have taste."

Thanks for stopping by, fella's.

Anonymous #2 has some great pictures of the hats...not to be missed.

BTW...I tried commenting upon them there but the word verification thingamajig was all askew.