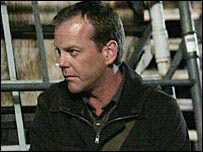 "US actor Kiefer Sutherland could go to jail if convicted of the two drink-driving offences he was formally charged with on Friday.

The charges were for driving under the influence and driving with a blood alcohol level over the legal limit.