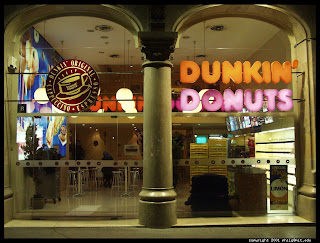 "A gunman remained on the loose Friday after shooting two students at Delaware State University, forcing the campus into lockdown as police searched for the suspect.

Classes at the Dover, Del., campus were canceled for the day, and students were being kept inside their dormitories until police could find the gunman.

"The shooter is still at large," Carlos Holmes, a university spokesman, said at a press conference near campus. "Given the lessons of the past year, we cannot assume that he is not on campus."

Police continue searching for the male suspect, identifying two persons of interest, both who are students, James Overton, chief of police at Delaware State University, said at a press conference. Police are interviewing one of those persons of interest.

Two 17-year-old students from the Washington, D.C.-area were wounded by the gunman with four to six shots fired, university officials said.

Holmes said the female student appeared to have suffered serious wounds. "They could be potentially life-threatening," he said. The male student's wounds were not as serious and he was hospitalized in stable condition, Holmes said.

Police hoped to find out more information once the victims were able to talk.

"We haven't had a chance to talk to them yet, and that's probably a big reason why the suspect is still at large," Holmes told KYW-TV of Philadelphia.

The Bureau of Alcohol, Tobacco, Firearms and Explosives was taking part in the investigation, according to Holmes."

Whew. Now that I know the BATF-U is on the case it'll be a lot easier to sleep at night.

So what do we know thus far:

Someone brought a firearm on campus. How this is possible when there are clearly marked signs to the contrary is beyond my ken. The next thing you know, they'll be telling us that criminals don't pay much attention to signs and laws, and I don't see how this can be possible because that means signs and laws do not deter the criminal mind. If that's true, then we all better arm ourselves and pronto because this could get ugly.

The firearm in question was not a high-powered one, or a high-powered assault rifle one, or a .50 caliber machine gun one, because the young lady would now be diseased and the young man would be missing a foot if something badass was used. Two in the labanza says to me that it was a .22 lr, but bear in mind that this is information provided by the police and translated by the media. And that means all bets are off until someone with at least a modicum of real knowledge enters the picturre.

Pictured: A dark and barren store front provides ample evidence that the police are serious about apprehending the shooter, or shooters.