Firefighters Use Forklift to Rescue 900 Pound Michigan Man From Home 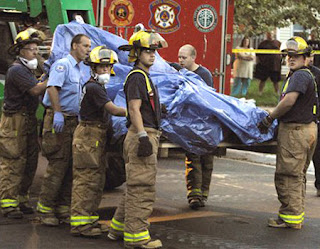 LANSING, Mich. — "Firefighters in Lansing, Mich., used a forklift Tuesday to lift a 900-pound man in need of medical treatment from the second floor bedroom of his home, the Lansing State Journal reported Wednesday.

More than 50 neighbors and onlookers gathered outside the home to watch the dramatic rescue, during which rescue workers cut a large hole in the wall of the house, extricated the man using a forklift, placed him on a platform, covered him with a blue tarp to shield him from the public and finally transferred the man to a flat-bed trailer to be transported to Sparrow Hospital, according to the report.

The man, 33, suffers from a genetic condition, Prader-Willi Syndrome, that causes chronic feelings of hunger, his brother said Wednesday. The man had not left his home since 2003, the paper reported."

Good thing he got out while the gettin was good.

Come Hillary-Care time, he'll be severely penalized for having a condition that initiates so drastic a sequence of events, as I seriously doubt that "Forklift Therapy" will be on Mrs. Bill's list of approved treatments.

Prader-Willi aside, blacks, the spanish, and illegals stress our healthcare systems to the bursting point, and how is Hillary going to get tough with the very people who elected her to begin with?

Require them to exercise? Stop making me laugh. Extra credit for anyone posting pics of minority gals jogging. And regarding Prader-Willi, here's what Wikipedia says:

Since they know the symptoms, look for all of the above to become illegal in 2009. Unless of course you get a socialist-doctor's-note.