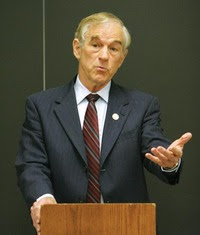 "Republican presidential candidate Ron Paul contends that the federal government has overreacted by limiting personal freedom in the wake of terrorist attacks six years ago, noting more people die on U.S. highways in less than a month’s time compared to the number who lost their lives on Sept. 11, 2001.

“We have been told that we have to give up our freedoms in order to be safe because terrorism is such a horrible event,” Paul said today to more than 1,000 supporters who attended a rally at a downtown Chicago hotel ballroom.

“A lot fewer lives died on 9/11 than they do in less than a month on our highways, but once again, who owns the highways? Do we own the highways? No. It’s a government institution you know. …We need to put all this in perspective.”

Ah, okay. How's this for starters then:

The attack on the WTC was committed by moslem extremists who have vowed to destroy America, killing as many Americans as possible.

Traffic fatalities are the result of ACCIDENTS. Accidents, you see, Ron, are hard to prevent because, well, they are ACCIDENTS, not planned, and with no malice aforethought. Go take your meds, have a lil nappy, and I'm sure everything will be quite clear when you awaken.