"Monneypenny Whatever Would I Do Without You..." 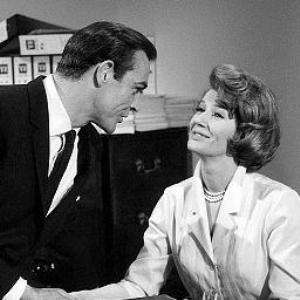 The Canadian actress, who was living in Australia, passed away at the age of 80.

She starred alongside Sean Connery in the first Bond film, "Dr No," in 1962.

Maxwell continued in the role until 1985, when she played M's secretary for the last time in "A View To A Kill" with Roger Moore.

Moore paid tribute to the star, calling her his 'lucky token."

He told Sky News she would be remembered with "great affection", adding: "She will certainly be missed by me, and I'm sure by millions of fans around the world."

She was succeeded by Caroline Bliss and later Samantha Bond.

But many fans credit Maxwell as being the definitive Miss Moneypenny.

Maxwell's final movie role was in the 2001 thriller "The Fourth Angel."

A spokesperson for Fremantle Hospital in Western Australia said she died there on Saturday evening."

Q, M, and now Monneypenny. One of the roles I'll never forget is her portrayal of Miss Maxwell in "Operation Kid Brother", starring Sean Connery's brother Neil in 1967. An Italian spoof on the Bond franchise, Lois got to sow some wild oats with a submachine gun, yes, the demur Miss Monneypenny got down and dirty in a surprising cool, but ultimately B rendition of her famous role as the quintessential Secret Secretary.

Ever the consummate pro, thanks for the good memories, Lois.