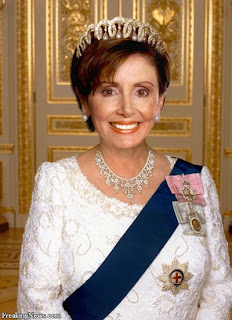 Pelosi made the comments during her trip to the Rio Grande Valley for the annual Hispanic Engineering, Science & Technology Week conference at the University of Texas-Pan American.

So then. Giving these illegal hooligans access to rape, steal, and murder is a good idea? Because doing otherwise might break up their gangs, laughing referred to as communities?

Sorry, Queen Nance. Your opinion means next to nothing. You madame, have become irrelevant, but it was bound to happen because your whack-job ideas are no longer the mere whispers of Kalifornia fruits and nuts, but presented on a much loftier stage, and that was a good thing. Higher the monkey climbs in the tree the more his ass shows, and you ma'am are all ass.

Pictured: Nancy Pelosi; pinned with Syrian 100 pound notes that were awarded for her magnificent vale dance done before the Syrian Parliament during a private showing.