The Real World Responds To Achma The Wonder Midget 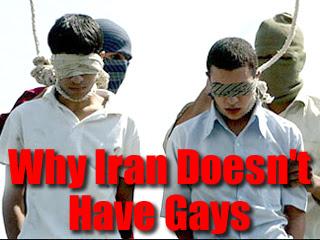 "Iranian President Mahmoud Ahmadinejad’s seemingly ridiculous claim that "we don’t have homosexuals, like in your country" masks the cruel reality that his government does far worse than ignore gays, human rights groups charge.

"There are criminal laws on the books in Iran that allows for people to be killed for being homosexual," said Paula Ettelbrick, executive director of the International Gay and Lesbian Human Rights Commission.

Just how many gays may have been killed — some say the figure is more than 400 — is impossible to determine. But Ahmadinejad’s flip follow-up answer to the question posed to him Monday at Columbia University — "We do not have this phenomenon. I don’t know who has told you that we have" — suggests he won’t take the issue seriously."

Listen, I'm too old to welcome gays with open arms and since the single, simple, and incontrovertible meaning of life is to make copies of oneself in perpetuity, the very concept of homosexuality is anathema to the laws of nature. Do what you will in your own demesne and don't ask me to like it because if its truly PRIVATE I shouldn't even be hearing about it, but no one should be persecuted for wanting to shag his pal. Laughed at, yes, but persecuted, no.

And hanging and stoning are definitely out of the question. Tarred and feathered...gimme some more time to think on it.