The Only Ones Committing Fraud Enough 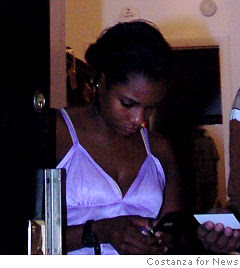 "A 25-year-old NYPD recruit was so strapped by her $25,100 Police Academy salary that she committed welfare fraud, authorities said.

Claribel Polanco, a mother of two who was collared yesterday at her Bronx home, was suspended from duty and most likely will be fired, police sources said.

"She's all the problems in a nutshell - a trifecta," one police source said. "The department pays dirt, so all they can hire are kids on welfare. ... So she committed a crime to get by. And now the department has a criminal on the books - and she's not even out of the Police Academy yet."

When asked about the charges, Polanco said only, "This is ridiculous. Why are they doing this?"

Polanco, of Morris Ave. in Morrisania, was an NYPD cadet - a program for students - and was attending college when she signed up for welfare, a police source said.

She had been receiving food stamps and Medicaid.

But she failed to notify the authorities when she was hired by the NYPD in January and continued to receive more than $1,000 in benefits illegally, court records show.

Thank heavens she was an ONLY ONE. Felony grand larceny, welfare fraud, misdemeanor larceny, and she gets off without having to post bail.

And seriously doll, but you committed a half dozen different crimes, so THAT'S why they "were doing this". Its called ENFORCING THE LAW. Might want to read up on it. The thing called "Law".
Posted by Fits at 9/21/2007 05:57:00 AM