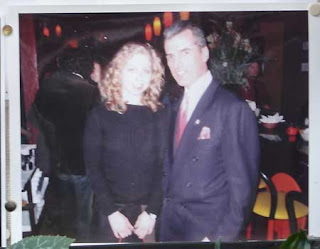 NEW YORK — "The owner of a New York City restaurant is “heartbroken” over a letter he received from former President Bill Clinton's lawyer asking that a photograph of daughter Chelsea be removed from his eatery — or face legal action.

The photo, taken of the former first daughter with Osso Buco owner Nino Selimaj, has been on display in the window of the Greenwich Village haunt for about five years, the restaurateur said. It was snapped when Chelsea, now 27, was having dinner there with a group of about 30 friends.

But Selimaj said he was shocked when he received a letter from Clinton’s lawyer Douglas J. Band on Sept. 18 threatening legal action if the photograph of “private citizen” Chelsea was not taken down. The photograph is still on display near the front entrance of the restaurant — only now, the letter is posted alongside it.

“We ask that you immediately remove that picture and any and all pictures displaying Ms. Clinton,” the letter warns. “We reserve the right to exercise any and all options available to us if you refuse to comply.”

Selimaj said he won’t take the picture down unless he’s “forced,” and he’d like to try to resolve the matter with the former president first. The Italian restaurant owner’s office was in the process of drafting a reply Wednesday that he hoped would be sent off by day’s end."

But, but WHY? You ask. Why would BJ and the Hag have their panties in a twist over a rather nice picture of their daughter?

NOBODY, but NOBODY uses a Clinton likeness to draw a crowd unless they've first PAID for it.

And to show my utter disdain for such goings on, I've blown up said picture and will be posting it at ranges in the area, and on the door to the Hogtown Irregulars Clubhouse its very self.