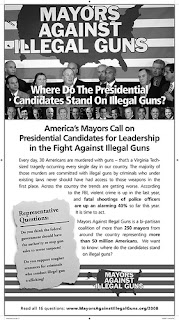 "The Bloomberg-funded group Mayors Against Illegal Guns announced today it has taken out newspaper ads in the Des Moines Register and New Hampshire Union Leader to remind the (declared) ‘08 hopefuls and primary/caucus voters about its crusade against illegal firearms.

The ad features Bloomberg front-and-center, and highlights questions from the 16-question presidential survey released by the group on Dec. 9, which the candidates have been asked to fill out and return by Jan. 2."

Iowa is by and large anti-handgun and pro-hunting rifle/shotgun, Fuddible to the 9's with its citizens easily swayed into believing the old canard that states "no reasonable person needs to own (insert objectionable firearm here...)"

A "May-Issue" state that leaves concealed carry up to the local sheriff, leading to graft and corruption as individual fiefdoms are established. First thing I was asked...off the record but of course...was my political affiliation and that right then and there doomed my chances of getting a license unless I could be persuaded to become a solid financial contributor to the sheriff in question.

To the Bloomberg thugs, "Illegal Gun" means ANY weapon not owned by law enforcement, or specifically designed for hunting and/or target shooting. Eight of the ten Iowans I spoke with during the 5 years living there agreed with that wholeheartedly.