Don't Ask Because She Ain't Telling 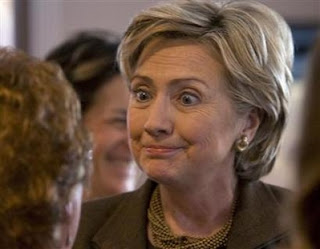 "As she races through Iowa in the days before next week's caucuses, Hillary Clinton is taking few chances. She tells crowds that it’s their turn to “pick a president,’’ but over the last two days she has not invited them to ask her any questions.

Before the brief Christmas break, the New York senator had been setting aside time after campaign speeches to hear from the audience. Now when she’s done speaking, her theme songs blare from loudspeakers, preventing any kind of public Q&A."

When the witch ran for Senator NOBODY, and I do mean nobody was allowed to approach Her Highness with a question. She'd arrive amid fanfare aplenty with more security than stars in the sky, a handler would address the crowd and tell them that Mrs. BJ Billy would say a word or two, and off they'd scamper after the shrill one tossed out a cliche or two. They lightened up a bit after Rudy dropped out of the race due to health concerns, figuring that there'd be no one around to call her on some stupid statement that proved she didn't know a lick about NY City or State.

This time around there are so very many "friends", hangers-on, acquaintances, and outright plants ALWAYS in ANY audience attending her visits, that she doesn't dare get caught spewing the same old BS to yet another paid questioner, or, heaven forbid, some filthy peon who somehow managed to get past the scrutiny of her advisers. Its a smart move having this creature STFU because all she can do is hurt herself, but eventually she's bound to boil over and plant foot firmly in mouth because all of this talking to mere nobody's is getting tiresome.

PS: I'm no medical person but just look at her left eye. Looks like one teeny more bulge and she'll either stroke-out or pop an orb into the balcony. Why can't they just begin the coronation proceedings and stop all of this stress on the poor dear?