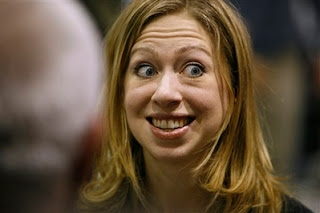 VINTON, Iowa (AP) - It's one thing for Hillary Rodham Clinton's campaign to turn down interview requests for the candidate's daughter, Chelsea. But can't a 9-year-old reporter catch a break?

Sydney Rieckhoff, a Cedar Rapids fourth grader and "kid reporter" for Scholastic News, has posed questions to seven Republican and Democratic presidential hopefuls as they've campaigned across Iowa this year. But when she approached the 27-year-old Chelsea after a campaign event Sunday, she got a different response.

"Do you think your dad would be a good 'first man' in the White House?" Sydney asked, but Chelsea brushed her question aside.

"I'm sorry, I don't talk to the press and that applies to you, unfortunately. Even though I think you're cute," Chelsea told the pint-sized journalist.

Tall and attractive, Chelsea cuts an impressive figure on the campaign trail; she plunges enthusiastically into the crowd after her mother's speeches, shaking hands and posing for pictures while asking, "Are you going to caucus for my mom?"

But onstage, Chelsea never speaks; she stands next to her mother and applauds but utters not a single sentence and doesn't even say hello. And reporters covering the campaign have been put on notice that Chelsea is not available to speak to them. An aide follows the former first daughter as she works the crowd, shushing reporters who approach her and try to ask any questions.

Famously protective of their daughter's privacy, Bill and Hillary Clinton have taken pains to shield Chelsea from the harsh glare and rough edges of presidential politics. She stayed largely absent from her mother's campaign until December, when she made her first visit to Iowa where there is a far better understanding of "special people", and none of the stigma nor insensitive reference to someone being "slow", or "a retard", labels the Clinton campaign strongly deny.

"Just because she takes a lot of time to make a decision about even the most commonplace of things and we have to dress her and all doesn't mean people have to be rude," an aide said to the Scholastic News when asked why Ms Clinton appears to be generally slow on the uptake.