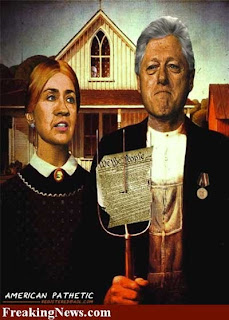 December 27, 2007 -- "Former President Bill Clinton, in his role as public point-man for wife Hillary's presidential campaign, has taken to carrying on about supposed evils of wealthy political candidates financing their own campaigns.

And the wealthy politician he finds particularly problematic is none other that Mayor Bloomberg - whose possible independent run for the White House is casting a shadow over former First Lady Hillary Rodham Clinton's own quest for the presidency.

Self-financed campaigns "violate the spirit of campaign-finance reform," the ex-prez told a crowd in Iowa, as quoted on the Web site politico.com.

Moreover, he added, the Supreme Court's upholding of limitless self-financed campaigns means "that the wealthier have more right to freedom of speech than the rest of us."

Now this is pretty remarkable stuff - on several levels.

For one thing, Bill Clinton in recent years has been particularly fond of including himself among the ranks of the wealthy - and rightly so, given his $8 million book advance and his six-figure public-speaking fees.

But he does so only when bemoaning President Bush's tax cuts, saying that wealthy people "like myself" don't deserve such help.

Now, of course, he's singing a different tune - he and Hillary are just a couple of just-plain-folks working stiffs.

For that matter, Clinton's concern about self-financed campaigns by rich office-seekers was nowhere to be seen when Hillary ally Jon Corzine essentially bought himself a U.S. Senate seat from New Jersey - and then the state's governorship, as well.

And it was AWOL in 2004, when another Democrat, John Kerry, funneled millions from his rich wife's bank account into his presidential campaign.

But "Clinton" has long-since been a crossword-puzzle clue for "hypocrisy" - and, anyway, it's that bit about violating "the spirit of campaign-finance reform" that's really amusing.

The spirit of campaign-finance reform?

These would be the same people who just three months ago were forced to refund $850,000 in donations from Norman Hsu - one of Hillary's biggest campaign bundlers - after it came out that he'd been a fugitive for 15 years on charges of defrauding investors.

(Though campaign officials insisted they had "no way of knowing" anything was suspect, it turned out that the California Democratic Party had passed on concerns that Hsu was involved in shady business, only to be reassured by Team Clinton that he was "completely legit.")

And the same people who were at the heart of a campaign-finance scandal - the 1996 Clinton-Gore re-election - that was forced to return millions in illegal gifts.

Clinton's attorney general, Janet Reno, refused to appoint a special prosecutor - sitting for two years on an explosive report by her chief investigator, Charlie LaBella, that charged a cover-up of "a pattern of conduct worthy of investigation," including "the calculated use of access" to the White House.

And it was Hillary, of course, who preached the moral imperative of stricter campaign-finance reform - then raised millions in so-called soft money for state Democratic committees (including New York's, which then used much of it for her 2000 Senate campaign).

Her argument at the time: It made "no sense" to "start living under proposals" - i.e., banning soft money - "that are not yet law." In other words, greedily rake in as much as you can until all such donations are banned.

So much for "the spirit of campaign-finance reform."

But you sure have to admire that old Clinton audacity."

As a firm believer in the premise that the human race is in fact more than one specie, it won't be all that long before they re-examine those "stains" on Monica's dress and establish irrefutable scientific evidence leading to the conclusion that Bill Clinton is not even remotely human. There exist evil people who know full well they ARE evil and gloat upon each and every nefarious deed. Pure symbiosis draws them together such as with Bill and Hillary. Like skunks selecting a proper mate.