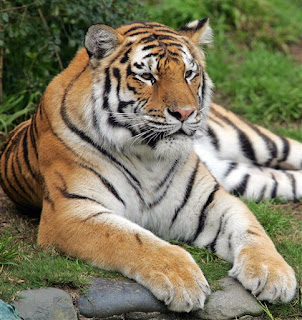 December 26, 2007 -- "A tiger jumped a moat and scaled a wall at the San Francisco Zoo yesterday before going on a rampage that killed a young man and critically injured two brothers.

The tiger - a 350-pound Siberian named Tatiana who mauled a zookeeper a year ago - was confronted by police as she was attacking one of the surviving victims.

She then started moving toward the officers and they opened fire with .40-caliber handguns, killing her, said San Francisco police Sgt. Steve Mannina.

"That shooting of the tiger was justified in saving that person's life," said San Francisco fire Lt. Ken Smith.

"We can only guess what occurred here . . . The tiger got out, and that's what we're most concerned about."

The dead man, in his early 20s, suffered neck wounds.

The injured victims - reportedly 19- and 23-year-old brothers - were taken to San Francisco General Hospital in critical but stable condition.

The names of all three - who had been visiting the zoo - were withheld pending family notification.

After fatally mauling her first victim, the tiger went on to the Terrace Cafe, which is about 300 yards away. That's where she mauled the two brothers."

So then, STILL believe yourself to be safe at a zoo? A zoo that since it's in Frisco of course bans concealed carry for all but the rich and famous, the same city that is still fighting the lawsuit it lost to the 2nd Amendment Foundation.

Kudos though to the arriving officers who kept their cool and killed it with nothing but .40 caliber sidearms. Not that the fohtie can't get the job done but it takes a cool hand to make a steady shot on an approaching big cat.