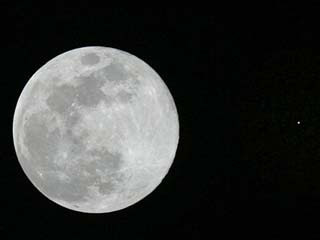 WASHINGTON — Mars will be unusually bright this Christmas Eve and the moon will be shining full — a development that might make Santa Claus rethink his need for Rudolph's red nose.

That idea, from Miami Space Transit Planetarium director Jack Horkheimer, made us wonder if retooling a certain reindeer song is the best way to explain it to the kids:

Mars is a red-tinged planet

With a very shiny glow

And if you look to see it

You will find the moon in tow.

The red planet will shine brighter because it will be directly opposite the sun, reflecting the most light, and fairly close to Earth, only 55.5 million miles away. The full moon will appear nearby, rising about an hour later, said Horkheimer, host of the public television show "Star Gazer."

All of the other Yuletides

Santa would have at his side

The shiny nose of Rudolph

Acting as his big sleigh's guide"

Now ya know why these dudes are usually kept under laboratory lock and key.

Being in the spirit is just so frickin cool.