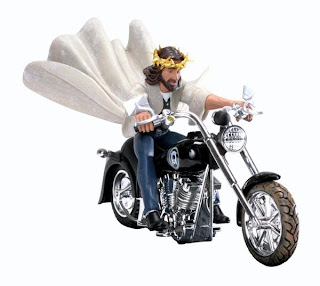 Among the items that one could put under the Christmas tree:

• An action figure of Jesus surfing.

• A piece from the Psalm 23 jewelry collection.

Welcome to the world of Christian retail.

Since the 1980s, when the main product was the Bible, the evangelical retail market has soared.

Wal-Mart, the nation's largest retailer, is carrying Christian action figures from One2believe in 425 of its stores.

A "Pick Jesus" T-shirt is available from Amazon.com.

"After 40 years in the business," said Bill Anderson, president of the Christian retail association CBA, "I know that both retailers and consumers always desire creative and fresh ways to express their faith."

The backbone of Christian retail remains the 2,050 stores that are members of the Colorado Springs-based CBA, which was formerly the Christian Booksellers Association.

In 2006, there was a 15 percent rise in the number of CBA retail locations, and sales through the stores and the Christian Retail Channel rose to $4.63 billion, a 16 percent rise compared with 2000, Anderson said.

At Heart & Home Christian Store in Arvada, one of 33 Christian retailers in Colorado, a shopper can find nativity scenes and ornaments.

They can also buy inscribed license-plate frames —"In case of Rapture, this car's yours"— and David and Goliath dolls.

There is an archaeological-themed game called "Lost Bible Treasures," with replica relics kids can dig up.

Becky Lauro, eyeing the Sweet Truth Mints and Turtle Doves chocolates, each wrapped in a verse of scripture, said she probably would not do most of her Christmas shopping at Heart & Home.

She said, however, she's grateful to go into a store where she is not be bombarded by the seemingly inescapable sex and violence marketed at the malls.

"There is nothing in here that would embarrass me in front of my mother and kids," Lauro said."

So then; before this point in time Evangelicals were piss poor hobo's without a dime to their name? Their buying power isn't growing any more or less than anyone's else's, there are merely more products that attract their attention.