Ann Coulter On Why The WickiLeaker Isn't Protected By The First

The government isn't trying to put a prior restraint* on Assange's publication of the documents, as in the Pentagon Papers case (though it probably could have). It wouldn't be punishing Assange for his opinions. The government wouldn't be prosecuting Assange to force him to give up his sources -- and not only because we already know who his source is (a gay guy in "an awkward place"), but because it simply doesn't matter.

Assange would be prosecuted for committing the crime of possessing and releasing classified national security documents that could do this country harm. The First Amendment has no bearing whatsoever on whether Assange has committed this particular crime, so whether or not Assange is a "journalist" is irrelevant.

The problem here is that people get their information from the media, which is written by journalists, and journalists have spent the last half-century trying to persuade everyone that laws don't apply to them.

If a fully certified, bona fide, grade-A "journalist," rushing to get a story, swerves his car onto a sidewalk and mows down 20 pedestrians, he's committed a crime. It doesn't matter that he was engaged in the vital First Amendment-protected activity of news-gathering.

If Paul Krugman shoots his wife because she's talking too much when he's engaged in the First Amendment activity of finishing another silly column about the economy, he's committed a crime.

Journalists can't run red lights, they can't print Coca-Cola's secret formula, they can't torture sources for information, and -- as Gawker Media recently discovered when it published a story on the new iPhone before it was released -- journalists can't misappropriate lost property.

Fox News' Alan Colmes said he checked with Fox News legal analyst Andrew Napolitano, who told him there's no case against Assange because the government can't punish "the disseminator of information." They should have been on Gawker's legal team!

If Assange had unauthorized possession of any national defense document that he had reason to believe could be used to injure the United States, and he willfully communicated that to any person not entitled to receive it, Assange committed a felony, and it wouldn't matter if he were Lois Lane, my favorite reporter.

As I have noted previously, the only part of the criminal law that doesn't apply to reporters is the death penalty, at least since 2002, when the Supreme Court decided in Atkins v. Virginia that it's "cruel and unusual punishment" to execute the retarded.

Also, journalists can slander people at will. That ought to make them happy. 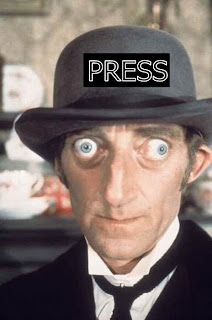 *Prior restraints may ONLY be connected to a right when that right is the right to bear arms. You may walk into the movie theater of your choice with your voice, even though that voice may be used to create a panic in which many people are trampled to death. That's what prior restraint is all about and why it cannot be associated with a right. Unless enough gun grabbers get together and force prior restraints aplenty down our throats when we try to execute...no pun intended...that particular right because it happens to be a right they don't agree with.
Which is cutting to the heart of the problem. There was a time when journalists and other dirty people took their jobs seriously and helped to protect all of our rights, but that time has flown the coop. Which makes them irredeemable scumbags because treating the American Bill of Rights like it's a Chinese menu and sampling one from column A with one from Column 2 depending upon ones taste preferences is something only a certifiable douchebag would even consider doing.
The WickiLeaker can publish any damnable thing he wants to. But when he breaks the law he must be punished just like anyone else who has shouted "FIRE!" in a crowded theater.
Posted by Fits at 12/16/2010 06:18:00 PM

One thing, though. What if all that super duper secret stuff is something the government plans to do to US?

Since the government fiddle fucks everything it attempts...except for the military...the safest place to be is right in front of whatever they're aiming at. It's the job of every government to beatdown its populace; difference is we're the only ones free enough to beat back. Part of the deal. Sure it sucks but its still the only game in the universe.