Remember back when King Barry The Bower was telling anyone who'd listen that since HE WON, everything HAD to go his way?
Liberals are like that. Compromise is something only the little people do. On face value he was of course correct; what's the point of a two-party system if everyone just jumps to the middle and forgets why their constituents gave them the job in the first place.
But that's King Barry. In error even when he's correct. Nothing wrong with compromise as long as it involves crossing the t's, and dotting the i's. Plenty wrong when someone is sent to do a job then reneges just to be voted Miss Congeniality like a certain Senator from Arizona.

But through it all and at the end of the day it is simply bad form to say the things he says. It's what happens when a man reaches so high an office without an impartial media to keep him honest.Having absolutely NO core value system to fall back upon, Barry only knows what his sycophants tell him and what the fawning media tosses at his feet like rose petals.


Seriously now; as a prime example, the marriage to Lady Shelly HAD to have been arranged. Who marries such an unintelligent racist cow? Someone not knowing any better. 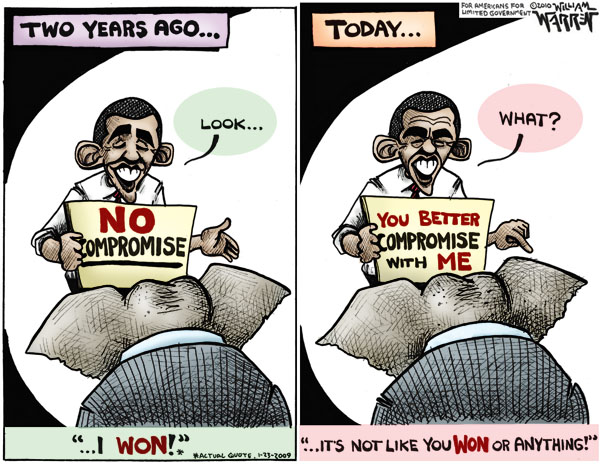