Simply The Dumbest Thing EVER Said On Cutlery Corner...

Ya know, I shouldn't watch Cutlery Corner. No one should. But to not watch means to miss the following:

"...This here's the Princess Rani; a modified Buck 110 with mastodon ivory handles. The mastodon ivory has gone through all the proper channels, and its old mastodon ivory. The knife was made before the ban on ivory*, so its a pre-ban mastodon ivory knife..."
Yes. Todd Boone, with Mr. James A. Frost's approval, announces to the entire world how incredibly stupid he is. But this is the way with grifters. They lie so often they pay little attention to what they're actually saying so they don't realize, for instance, that there IS NO BAN on mastodon ivory.

Mastodon's are not on the endangered species list. Mastodons have been extinct for at least 15,000 years (Nope. My bad. Recently found remains indicate 11,000 years). But the Frost folks got their hands on some ivory handled knives and not having a clue as to what a mastodon is, heard the word "ivory", then made up a lie about how the knife was made before the ban on...you got it...mastodon ivory.

I think what Todd was really trying to say was that the knife was made by a traveling Neanderthal 15 to 20,000 years ago, BEFORE the mastodons went and got themselves all extinct. But don't go blaming Frost Cutlery because they had NO hand in extincting them mastodons. Woolly Mammoths, yes. New archaeological evidence has been unearthed linking Frost Cutlery folding hunters to badly butchered mammoth remains, suggesting that not only did paleolithic tribesmen kill mammoths they employed piece of shit knives to do so. Their bad. 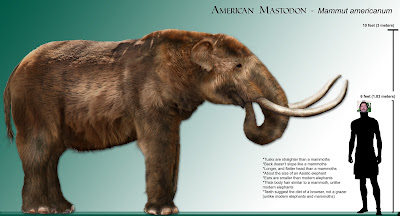 Pictured: American Mastodon. The elephant looking thing, not Todd. And the caption is incorrect; mastodons resembled woolly mammoths, as not all mammoths had such coats of hair. Which brings us to question if the handle material was mastodon or mammoth. There are over 150 million mammoth remains in Siberia alone, making the ivory less and less expensive as more and more are unearthed. But, since the information is coming from the illiteratae at Frost, who really knows. Please click for a full sized picture.
*The "ban" began in 1990, as nearly half the African states exporting ivory joined together to prohibit its sale and availablity. In most of Africa one can obtain all the ivory one wants, but it was the black market in it that was so severely thinning the elephant herds, and once that was curtailed it simply wasn't financially feasible to acquire and export the estimated 400,000 tons per year that had long been flooding the marketplaces. Most of the Asian countries that had relied upon ivory for medicinal and religious practices still import ivory on a regular basis but nowhere near the quantity they consumed pre-ban.
Posted by Fits at 12/06/2010 03:52:00 AM