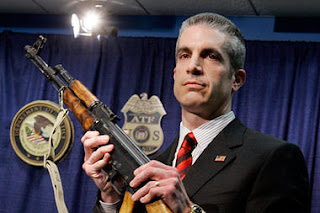 The Senate did not vote on whether to confirm Andrew Traver as the next leader of the Bureau of Alcohol, Tobacco, Firearms and Explosives this Congress, sending his nomination back to the White House on Wednesday.
Traver, the chief of the ATF’s Chicago office, faced strong opposition from the National Rifle Association. The gun rights organization said in a news release that he “has been deeply aligned with gun control advocates and anti-gun activities,” noting his involvement with the Gun Violence Reduction Project, a national program supported by police chiefs, and the Joyce Foundation, which pushes for tighter gun laws.
President Barack Obama nominated the 23-year ATF veteran on Nov. 17, but the Senate Judiciary Committee never acted on his nomination. Obama now must re-nominate Traver if he wants the Senate to consider him in the next Congress, which convenes in January."
And THAT ain't a'gonna happen. Andy the human anal probe Traver can go stroke his captured AK's elsewhere, and don't let the door hit you in the ass on the way out, Andy. And it DOES really look as if he wants to put that bad boy up to his lips and blow, doesn't it? Not that there's anything wrong with that.
Thanks to Sipsey Street Irregulars for the pic and the link.
Posted by Fits at 12/29/2010 02:15:00 AM

Obama may try to make a recess appointment
Paul in Texas

Yep. Nothing to do but keep on our representatives to take this cretin to task. Thanks for stopping by, Paul.