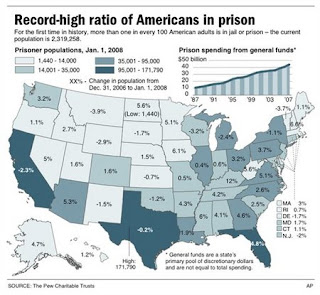 NEW YORK (AP) - "For the first time in U.S. history, more than one of every 100 adults is in jail or prison, according to a new report documenting America's rank as the world's No. 1 incarcerator. It urges states to curtail corrections spending by placing fewer low-risk offenders behind bars.

Using state-by-state data, the report says 2,319,258 Americans were in jail or prison at the start of 2008 - one out of every 99.1 adults. Whether per capita or in raw numbers, it's more than any other nation."Great news, all around. Now all we need to do is build even more jails and courthouses, then REALLY get tough with the criminal element.

Just remember; for every one of them behind bars its less we have to shoot on our doorstep after catching them trying to B&E or harm our loved ones. The Supreme Court needs to decide this capital punishment deal and do it pronto so's we can begin frying and gassing and putting down like dogs the ones who need it.

Oh and by the way; 20 to 25 percent of all incarcerated crooks are illegal aliens and NOT Americans, so don't believe this story with regards to the ratio of good and bad Americans.