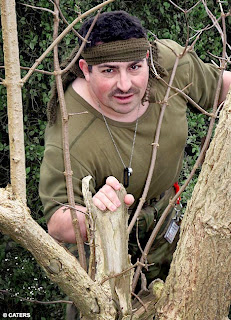 "Skegness' own John Rambo might draws stunned glances from passers-by as he patrols through the town in full military get-up and bandana, but at least no one dares mess with him.

John, 40, changed his name 20 years ago after watching the Rambo movies for the first time.

Not content with sharing the same name as the tough action hero and dressing the same, he has also perfected Sly Stallone's distinctive slow drawl.

He said: "I really am the real-life Rambo.

"Generally people think twice about what they say to me. Nobody messes with me.

"Then they realise the truth."

Unmarried John changed his name by deed poll in 1988 when he was 20 - the year the third film came out.

"People had already nicknamed me Rambo. I had a really short fuse and I always wore a bandana.

"I thought Rambo was great and we were so similar I knew I was just the real-life version of the character.

"The name was the only thing missing and once I changed that I really was John Rambo." It is not just John's name that makes him stand out from the crowd as a real-life action hero.

Wearing a bandana and combat trousers he is the spitting image of Sylvester Stallone's character in the popular films.

He said: "I've always worn something on my head, usually a cap, but I started wearing a bandana too.

"In the films Rambo wears a red one but mine's camouflage green. They're similar enough though. "I wear combat trousers quite a lot, so I look just like him."

Ah, pal? Sorry but you don't look a bit like Sylvester Stallone, and while I'm dashing your insane little dreams...just between you and me of course...

How many confirms do you happen to have?

(can't get the daily mail link to work here, sorry about that but I've included the meat of the story)