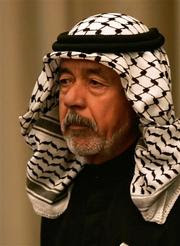 BAGHDAD (AP) -- "Iraq's presidential council has endorsed the execution within a month of Saddam Hussein's cousin, known as "Chemical Ali," for his role in the 1980s scorched-earth campaign against Kurds, officials said Friday. But it spared the life of two other officials amid Sunni protests that they were only following orders.

The approval by Iraq's President Jalal Talabani and two vice presidents was the final step clearing the way for Ali Hassan al-Majid's execution by hanging. It could now be carried out at any time, a government adviser and a prosecutor said."

It'll be cool when Iraq truly enters the 21st Century and offers Pay-Per-View.

I'd drop some heavy bucks to watch this monster swing and kick.

"Live From HBO Baghdad: DOPE ON A ROPE"