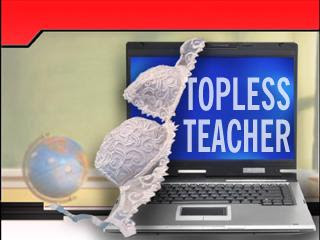 "She's being called the topless teacher.

A 27 year old woman who taught at a newly opened, private high school is facing a criminal charge for allegedly e-mailing topless pictures of herself to one of her students!

The former teacher, Melissa Moss, was fired from her job as an English teacher at the in Dardenne Prairie after the investigation began in November.

Court documents say in mid-November, Moss e-mailed two pictures of herself nude from the waist up to a 15 year old boy in her class."

Where the hell were teachers like this when I was in school? Um, I, ah, mean, why this is just terrible!