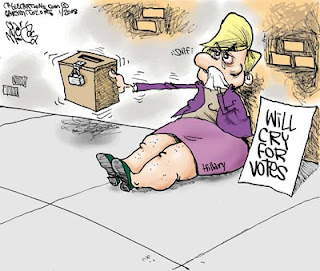 AUSTIN — The Texas Democratic Party warned Thursday that election night caucuses scheduled for Tuesday could be delayed or disrupted after aides to Hillary Rodham Clinton threatened to sue over the party's complicated delegate selection process.

In a letter sent out late Thursday to both the Clinton and Barack Obama campaigns, Texas Democratic Party lawyer Chad Dunn warned a lawsuit could ruin the Democrats' effort to re-energize voters just as they are turning out in record numbers.

Spokesmen for both campaigns said there were no plans to sue ahead of the March 4 election.

"It has been brought to my attention that one or both of your campaigns may already be planning or intending to pursue litigation against the Texas Democratic Party," Dunn wrote in the letter, obtained by the Fort Worth Star-Telegram. "Such action could prove to be a tragedy for a reinvigorated Democratic process."

TRANSLATION: We have these idiots right where we want them so lets keep the ball rolling because the writers strike is over and they'll all be moving on to OTHER fantasies...