Checking Back In With The Religion Of Peace... 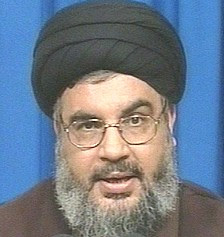 "If Israel's attacks Lebanon again, we will wage war without any preconditions," Nasrallah said during a speech in Beirut in honor of Hizbullah arch-terrorist Imad Mughniyeh, who was assassinated last week in Damascus.

"The disappearance of Israel is an inevitable fact. It is an historical process in the region which will come to an end in several years," he said."

Yes. In other news, Hizbullshit scientists have determined that all along the moon has been made of green cheese, which according to the ancient texts can imbue the average man with the strength of ten, leading them to petition the United Nations for a spare rocket ship so that they may travel into space and bring back enough lunar-cheese-serum to bolster their meager forces and thereby conquer the Israeli's.