The Company One Keeps... 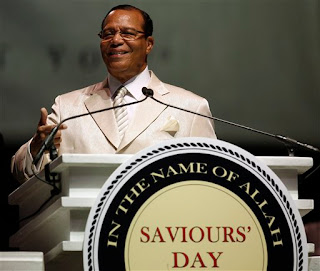 "Nation of Islam Minister Louis Farrakhan said Sunday that presidential candidate Barack Obama is the "hope of the entire world" that the U.S. will change for the better.

The 74-year-old Farrakhan, addressing an estimated crowd of 20,000 people at the annual Saviours' Day celebration, never outrightly endorsed Obama but spent most of the nearly two-hour speech praising the Illinois senator.

"This young man is the hope of the entire world that America will change and be made better," he said. "This young man is capturing audiences of black and brown and red and yellow. If you look at Barack Obama's audiences and look at the effect of his words, those people are being transformed."

Barry Hussein's minister believes Farrakommie to be the bees knees and one would imagine so does Hussein himself.

Fits right in with the racists who hate America template, and even though Bill and Hillary have done some terrible things, at least they never crawled in bed with the likes of Minister Louis.