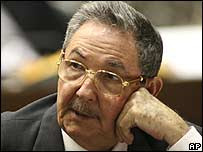 "Raul Castro has been unanimously selected to succeed his brother Fidel as leader by Cuba's National Assembly.

Fidel Castro stepped down last week after nearly half a century in charge. Raul has in effect been president since Fidel had major surgery in July 2006.

It is understood that he was the only nominee in a vote seen as a formality.

But the real shock came when he chose 78-year-old Politburo hardliner Machado Ventura as vice-president, says the BBC's Michael Voss in Havana."

To whom, pray tell?

An alien visitor from the Orion Nebulae?