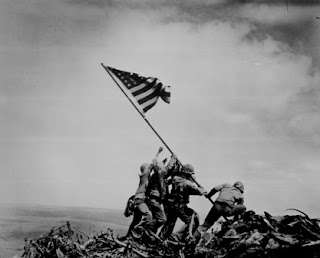 63 years ago today, Marines stormed ashore onto the Sands of Iwo Jima.

"At the end of the Battle of Leyte in the Philippines the Allies were left with a two month lull in their operations prior to the planned invasion of Okinawa. Iwo Jima was strategically important: it provided an airbase for Japanese aircraft to intercept long-range B-29 bombers and provided a haven for Japanese naval units in dire need of any support available. The capture of Iwo Jima would eliminate these problems and provide a staging area for the eventual invasion of the Japanese mainland. The distance of B-29 raids would be nearly halved, and a base would be available for P-51 Mustang fighters to escort and protect the devastating bomber raids. Intelligence sources were confident that Iwo Jima would fall in five days, unaware that the Japanese were preparing a quintessentially defensive posture, radically departing from any of their previous tactics. So successful was the Japanese preparation that it was discovered after the battle that the hundreds of tons of Allied bombs and thousands of rounds of heavy naval gunfire left the Japanese defenders almost unscathed and ready to wreak losses on the U.S. Marines unparalleled up to that point in the Pacific War. In the light of the optimistic intelligence reports, the decision was made to invade Iwo Jima: the landing was designated Operation Detachment."
Posted by Fits at 2/19/2008 08:35:00 PM